Now in its second year, the award proffers $500 and publication to a Vermont poet who has not already published more than one book. Bags and Tools is Fleming’s debut collection. As a freelance editor for W.W. Norton since 2003, though, he’s had a hand in the creation of innumerable volumes, including many textbooks and anthologies that English majors read nationwide. Fleming lists carpenter and musician among the many jobs he’s worked over the years — and Swaziland (renamed Eswatini in 2018) and Thailand among the places he’s lived.

This unusually rich variety of lived experiences makes Bags and Tools a pleasure to read. Divided into four sections, the author confronts the dread of the pandemic, recounts personal adventures from his wild years, and muses about subjects global and local. Composed almost entirely in rhyme and meter, the book is also an impressive feat of formalism — especially since the gorgeous musicality in Fleming’s poems never gets in the way of what the author is communicating.

“What is in the bag of the speaker who presents themselves as a would-be vagabond, a wayward traveler?” Francis asks in her foreword to the book, referring to the title poem, which serves as a prologue. Wry, allegorical and composed in flawless rhyming tetrameter, these first four quatrains could be mistaken for lyrics by Leonard Cohen, or perhaps a workers’ ballad penned during the Industrial Revolution. The speaker schleps around bags full of lead, then trades them for gold from a mysterious beggar on the road, only to realize they can’t find a use for that, either. Finally, at an ironmonger’s shop, the speaker uses the gold to buy tools. “And now at last I can begin,” they say — before digging a hole and throwing them in, along with the bag.

After this intriguing prologue, the reader encounters an ominous illustration of a plague doctor. Burlington artist and Sundog managing director Frances Cannon provided ink drawings that punctuate the book between its four sections, hinting at what’s to come.

The first section opens with “Casino.” Here, the alternating rhyme scheme remains, but the prologue’s jaunty meter and heightened diction fall away; Fleming’s voice sounds much closer to everyday speech. “I hit the jackpot the night I met you. / Hell, what did I know from jackpots? The game, / the hard, hungry art of losing — I knew / that much.” This is a love poem, a complicated one, written in rhymes so fluid and unforced that they aren’t immediately apparent. Ultimately, the speaker imagines himself as “a gaunt, / furtive escapee, caught in the spotlight / glare of getting everything I wanted.”

Fleming’s formal chops are on full display. The opening section, “Just a Word,” includes several brief terza rima, sonnets, a bluesy invocation in which every other line ends with the word blues, and a sonnet-crown titled — you guessed it — “Corona.”

A crown of traditional sonnets is a poetry flex. Fully expressing anything in 14 lines while adhering to a rigid rhyme and meter is hard enough. A sonnet-crown multiplies this difficulty, demanding that the poet link a series of seven sonnets through their concluding lines: The last line of each sonnet is also the first of the following one. Sound complicated? It is, but the form allows poets to stretch out and explore their subject in a way not possible in the all-too-brief 14 lines of one sonnet alone. For Fleming, the crown form and corona theme make for irresistible wordplay.

Tacoma, Wash., doctor and poet John Okrent may have been the first to write a coronavirus sonnet-crown. By the end of March 2020, he had published the first few of what would comprise a book-length crown of sonnets, This Costly Season, which he’d jotted down between treating COVID-19 patients. But Okrent was by no means the only poet to fill dread-filled days with sonneteering. 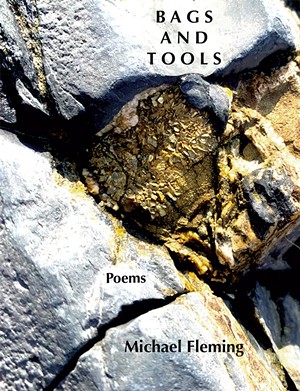 Fleming’s take on the pandemic maintains more of the sonnet-crown’s formal rigor than Okrent’s — but it lacks the urgency and perspective of a doctor’s notes, of course. Occasionally, “Corona” feels like an overly familiar recounting of the early days, much of it composed in past tense. Phrases such as “Now we don’t play music together” and “Our masks are the price we pay / for breathing, venturing out,” might have been enriched if more specifics or personal description had replaced allusions to a universal nostalgia. After all, the American memory of the pandemic is hardly universal and remains a major fault line between political poles, urban and rural areas, the healthy and the at-risk, and “essential” workers and those with the privilege of working remotely. “We were masked all along” the fourth sonnet concludes — but what does that refer to?

Section two, titled “Hindsight,” makes a satisfying shift in tone. “Misery is Canada. Loneliness / is a road in northern Ontario,” Fleming writes in “The Merry Dancers.” He lets his command of lush language take over while still composing in rhyming quatrains. “Madness is blackflies, relentless, meat-driven, / stippling a white shirt fire-itch red.”

Some poems in this section recount the author’s days as a young man, tramping around in emulation of his heroes. In “On the Bus,” he alludes to Ken Kesey’s psychedelic bus named furthur, Jack Kerouac’s novel Dharma Bums and wilderness-wandering Chris McCandless.

“Math Teacher,” for example, is an amusingly self-deprecating portrait of a foreigner teaching in Swaziland, who “looks like cooked impala tongue.” His students ask, “Who is this stranger from across the sea? / He has no tribe, no sons, no cattle — how / can we respect such a man?”

By the middle of the book, Fleming’s work feels less like a casting off of tools and more like a gathering of them. Or rather, a gathering of nonphysical tools, an accumulation of memories and experiences. In the final section, “Lexicon,” the author says words themselves are insufficient for the beauty he sees around him. “Metaphors miss it,” he writes in “Words Fail.” “The insistence of spring / is not art, not a song or a poem or / a picture — it’s not like anything.”

The prologue of Bags and Tools declares an unburdening of the self — first from the weight of useless labor, then of useless wealth — and ends with a refusal to carry even useful tools. This might seem like a romantic ideal at first, but ultimately, aren’t language, memory and experience all we can take with us? Fleming’s exceptionally well-wrought debut is a reminder of how rewarding the unseen labor of the mind can be.